What's my FAFSA dependency and why does it matter?

Check out this guide from Mos to find out what your FAFSA dependency status is and how it affects financial aid. 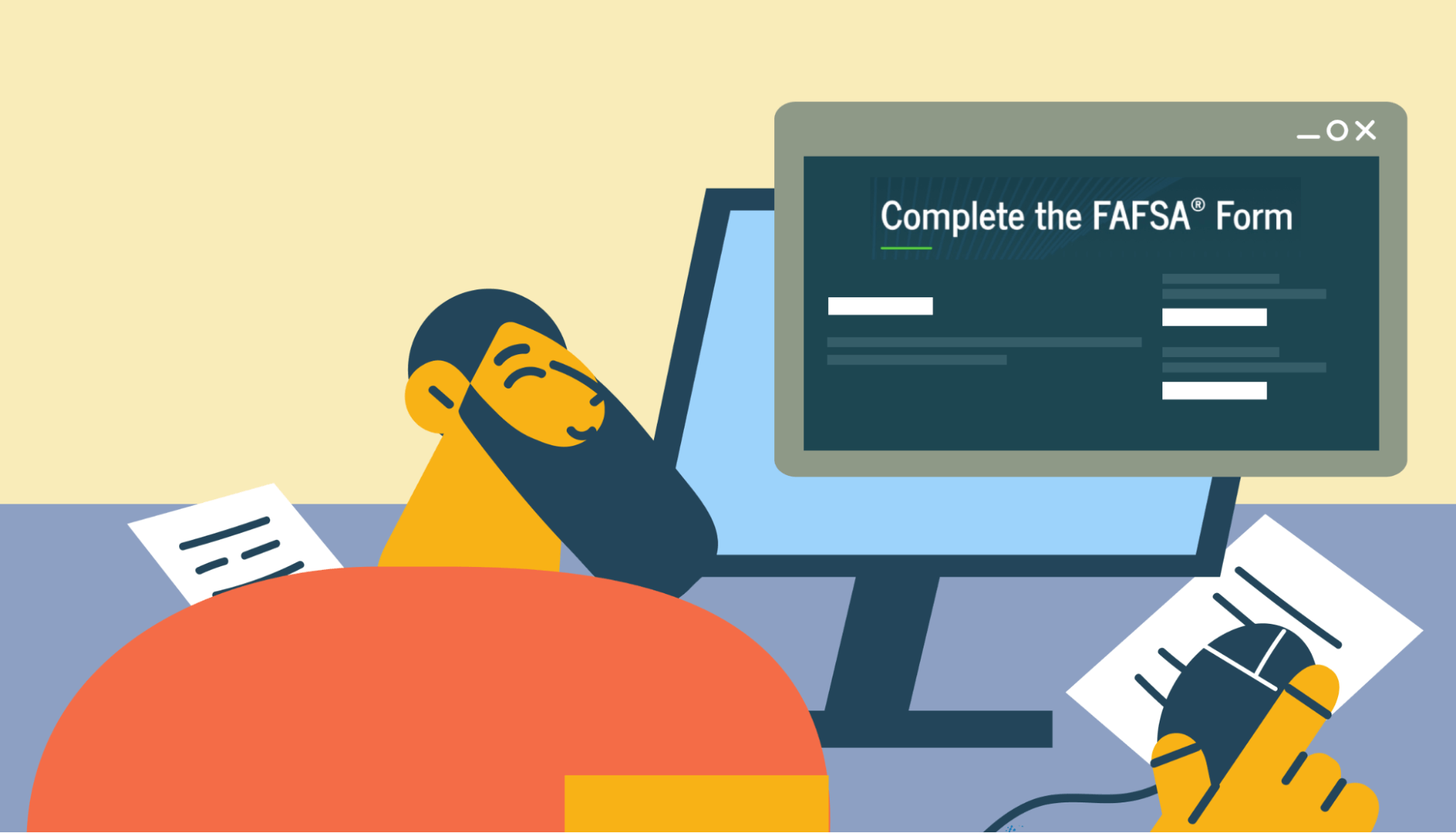 If you’re trying to pay for college, chances are you’ll need some federal student aid. More than 2/3 of all college students apply for financial support from the government and their colleges using the US Department of Education’s universal application form.

The Free Application for Federal Student Aid (FAFSA) streamlines the financial application process—enabling the federal government, your state government, and your school to access your information in one place and quickly and efficiently decide how much financial aid you need to pay for school.

But one key factor that’s going to determine how much financial aid you’re able to access is whether you’re a dependent or independent student.

In terms of federal student aid, your dependency status essentially indicates whether you’re in some way financially dependent upon your parents or guardians. This status gets determined based on the information you include in your Free Application for Federal Student Aid (FAFSA) form—and then dictates your eligibility for certain financial aid opportunities.

The US Department of Education defines anyone as an independent student who is: 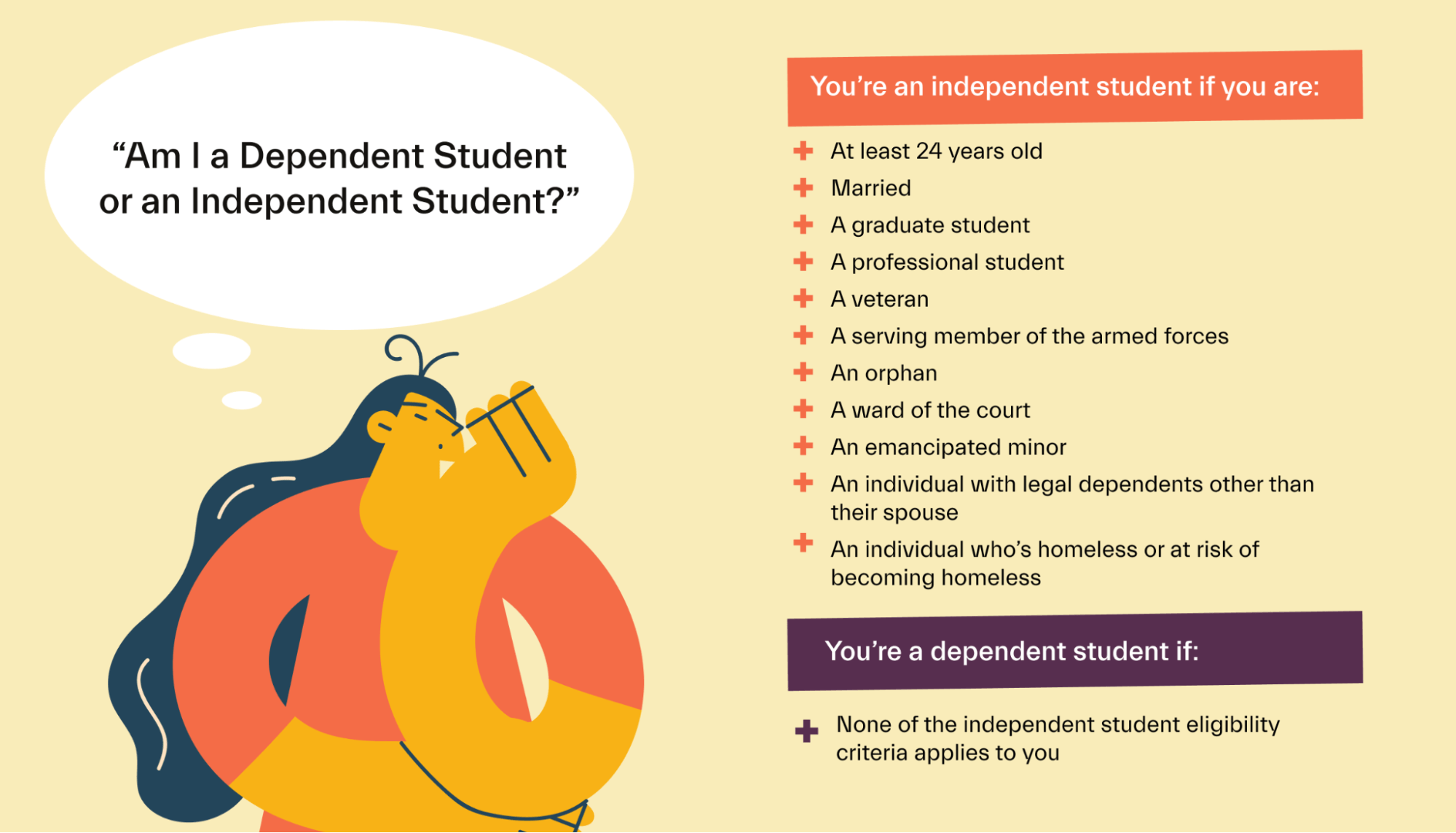 Generally speaking, most students who complete the FAFSA aren’t FAFSA independent students. This is because they still receive some form of financial support from their parents and are under 24—but that doesn’t mean there aren’t quite a lot of independent FAFSA students around.

Because your dependency status is dictated by the information you include in your FAFSA, you have to carefully and honestly consider every single question on the application form.

Do you have to provide your parents’ information on the FAFSA form?

You may be required to include information about your parents on your FAFSA form, but it’ll depend on your dependency status. 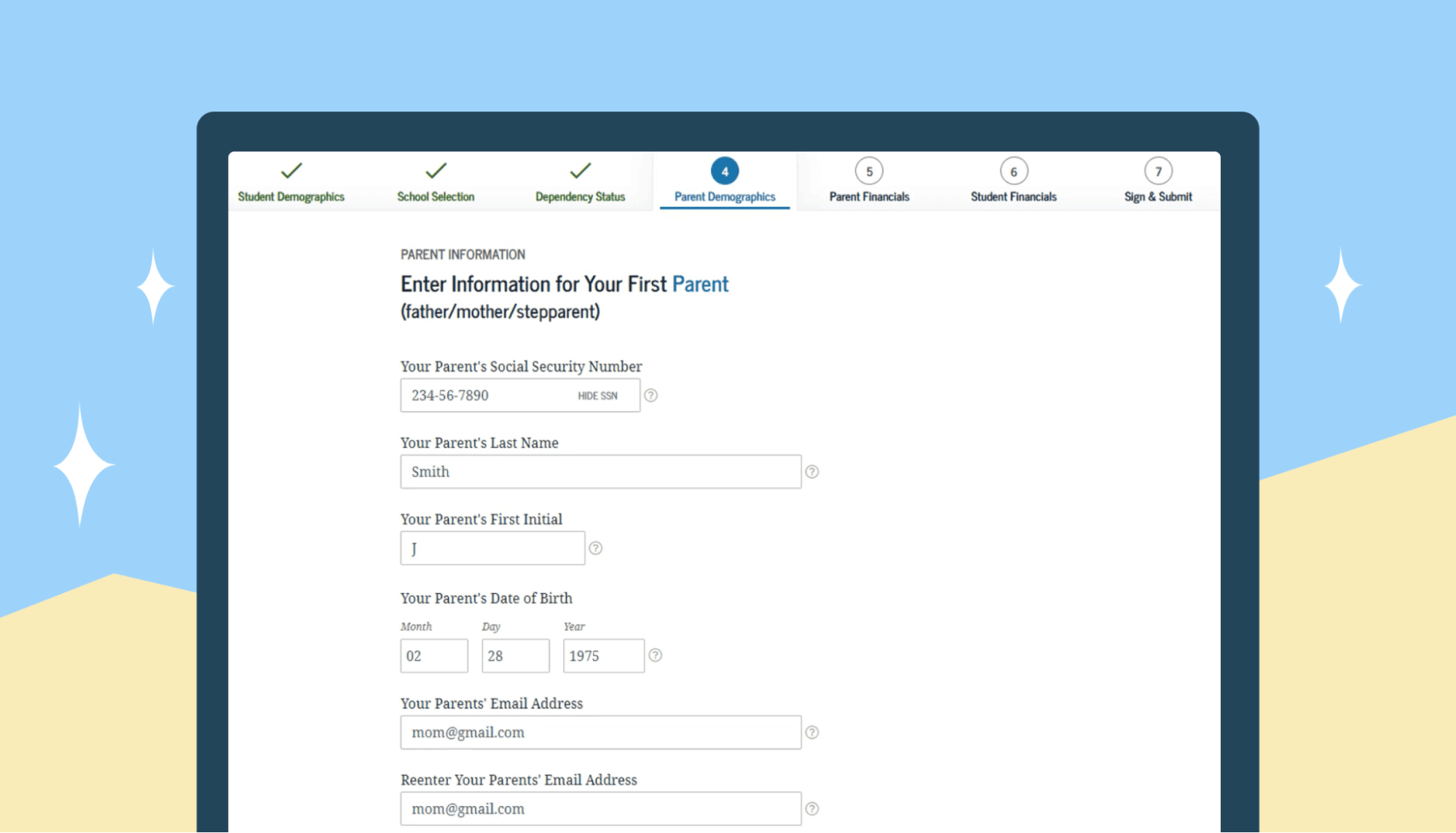 All of the college-funding programs offered by the US Department of Education are based on the idea that it’s primarily the responsibility of you and your family to pay for your college education. This is particularly important to bear in mind if you’re a dependent student.

The information about your parents will then be assessed alongside your information so that the federal government, state government, and your school can get a complete picture of your family’s ability to pay for school.

It’s important to note that your parents won’t necessarily need to pay anything for your college education just because you’re a dependent student. You’ve just got to make sure you include all of the relevant details about your parents and their financials so that the Department of Education can assess everyone in the same way.

In terms of the parent details you have to include as a dependent student, you should expect to have to report all the basics of your family’s income and the assets they own.

So, why does your parents’ information matter so much?

Because of this, the expected family contribution (EFC) of an independent student, excluding parent information, will generally be lower than the EFC of a dependent student.

Despite all of this, there’s an exception to this rule when it comes to including your parents’ details.

If you’re enrolling in a law school or getting a degree in an allied health profession, you may need to include your parents’ information on your FAFSA form—even if you’re classed as an independent student.

When it comes to federal funding, parent information is often used to help determine your financial eligibility for various types of sector-specific funding like a Health Professions Student Loan available from the US Department of Health and Human Services.

A student who qualifies as independent from a FAFSA point of view doesn’t need to file their parents’ financial information as part of their application. Independent students only file information about their own income and assets—and this often works in their favor.

As we’ve already touched upon, that’s because an independent student normally has a greater financial need. That also normally means they have better eligibility for various financial aid opportunities.

Some financial aid programs don’t give your dependency status weighted value—meaning that you’d be offered the same amount whether you were financially independent or not.

For example, let’s take a quick look at Direct PLUS Loans.

Under the Direct PLUS Loan program, a dependent student can currently borrow up to $5,500 to help pay for tuition during their first year at college. On top of that, their parents can also borrow more through a Parent PLUS Loan.

At present, a financially independent freshman entering college or a university can borrow up to $9,500 per year. That’s nearly double the amount of a dependent student. 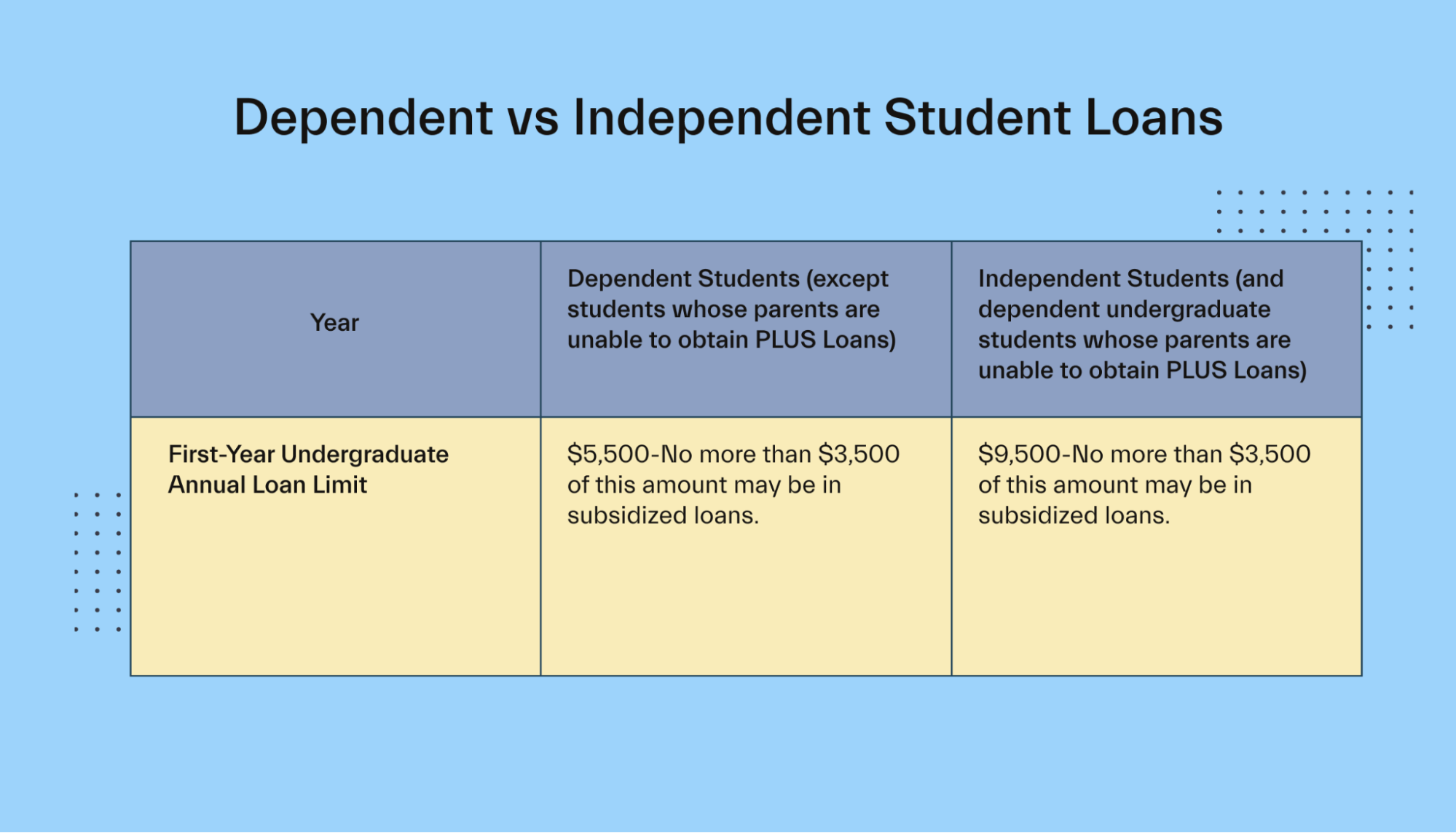 That being said, it’s also worth noting this higher cap can often be accessed by dependent students, too.

Why wouldn’t a parent or guardian qualify for a Parent PLUS Loan?

If your parents have an adverse credit history, they may not qualify for a federal student loan. Citizenship status can also come into play when applying for a Parent PLUS Loan. But the biggest eligibility requirement is that you’re the child’s biological or adopted parent.

Grandparents and legal guardians aren’t generally eligible to receive Parent PLUS Loans—even if they’re the primary caregiver responsible for raising that student.

But because parents are allowed to borrow any amount up to the full cost of attendance (after subtracting other forms of financial aid), an independent student without parental support might still end up with less financial aid regardless of the higher federal student loan limit.

As a result, independent students are typically advised to focus more on financial aid awards that are on offer from the school they’re attending. Work-related income is also going to be essential in paying for education-related expenses.

How can you become an independent FAFSA student?

If you’re reading all of this thinking that you’d be better off financially if you were classed as an independent student, it is possible to change your status despite not meeting the typical eligibility requirements of financial independence.

In certain situations, the US Department of Education has the power to grant you a dependency override regardless of your ability to meet independent student requirements from a FAFSA point of view.

A dependency override is when your college changes your dependency status from dependent to independent.

These might include an abusive family environment, parental incarceration, or if parents are judged to lack the physical or mental capacity to raise a child.

It’s important to note that the following reasons are not judged sufficient to enable a dependency status change:

To apply for a dependency override, you’d need to request this in writing directly to the finance office at your school. The financial aid administrator at your college can help you request an override or learn more about the funding available to you despite any lack of parental support.

At the end of the day, it’s absolutely critical that you fully understand your FAFSA student status prior to sitting down and completing your FAFSA.

After all, if you want to make sure you get the correct amount of financial aid without any delays, you need to understand all of your responsibilities and eligibility requirements in terms of the pieces of information you must include on your FAFSA form.

We can help you apply for hundreds of scholarships and grants and negotiate for more financial aid. Check out Mos.com to learn more.

For each friend you invite to Mos,
you'll each get money to fund your fun.

More reads for you

How to get a scholarship: a complete guide

What is Schedule 1 for the FAFSA? 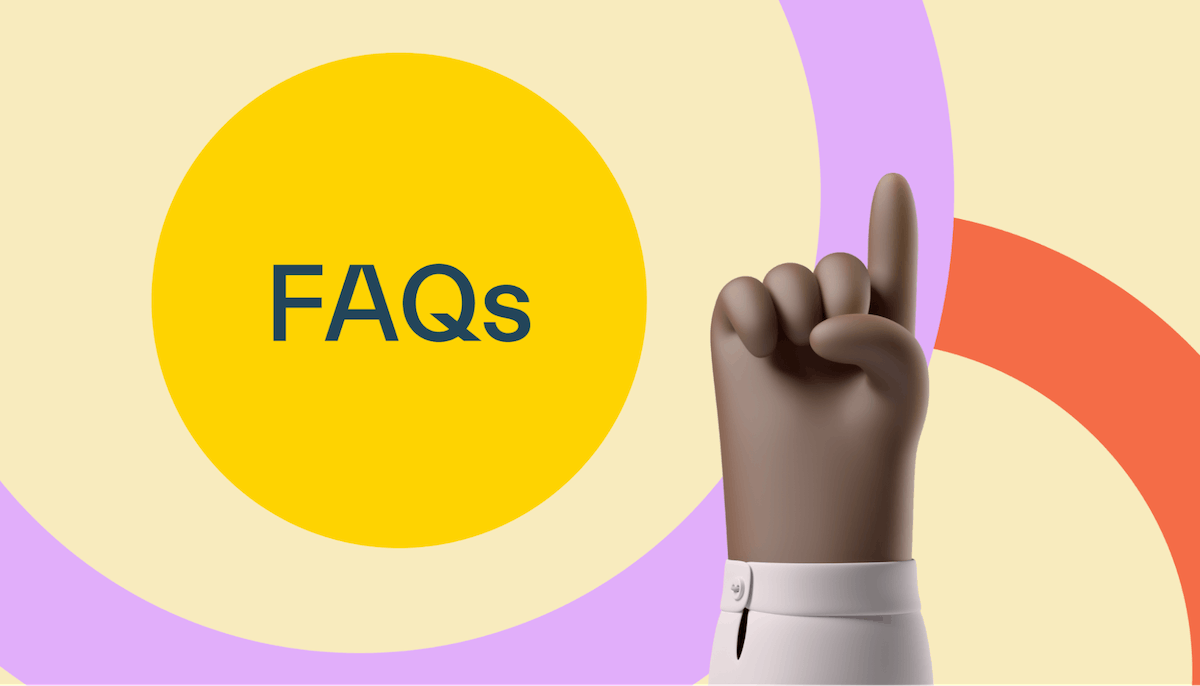